The Land Use and Community Form Plan ("Land Use Plan" or "LUCFP") of Trenton250 will provide recommendations for the update of Trenton’s zoning ordinance. The recommendations were established to achieve the community-driven guiding principles expressed in the Vision Topic-Focused Report (aka Vision Element) as well as the goals identified in all the Topic-Focused Reports. Moreover, the Land Use Plan shows how the Vision and Approach maps can be achieved through regulating land use.
These documents express a vision for Trenton that includes a thriving downtown core, stable and strong residential neighborhoods, and opportunities for redevelopment, the growth of industry, the creation of a vibrant park system highlighted by the Assunpink Greenway Park project, and a natural and urban trail system that links the City's many assets. To achieve this vision, it is imperative that current zones are updated and redrawn to reflect the community goals.
This document fulfills the statutory obligation that the Master Plan include a Land Use Element, “showing the existing and proposed location, extent and intensity of development of land to be used in the future for varying types of residential, commercial, industrial, agricultural, recreational, educational and other public and private purposes or combination of purposes; and stating the relationship thereof to the existing and any proposed zone plan and zoning ordinance… including a statement of the standards of population density and development intensity recommended for the municipality.” (40:55D-28.b)

In this report "density" describes the number of residents (or number of units) within a unit of geography (e.g. units per acre or residents per square mile). Intensity refers to the scale of development on a particular site and is typically described through bulk and use (e.g. three-story multi-family vs three-story single-family). Under these definitions, the density of a neighborhood can increase (or decrease) even as the intensity of development remains stable.
This Land Use Plan supports the recommendations made in the Topic-Focused reports; the standards in this LUCFP align with the goals set-forth. Specifically, increased residential populations downtown as called for in The Economic Development and Housing Reports, and increased residential densities around transit stations, a goal of the Circulation Report. In the Downtown and near transit, the Land Use Plan standards allow for more dense and intense development than currently exists in these areas.
However, the situation in Trenton's neighborhoods is distinctly different. The Vision, Housing, and Circulation Reports encourage maintaining and promoting the current mixed-use walkable urban character in the neighborhoods. To that end, the LUCFP encourages new development to match the historic residential and commercial intensity. Stated differently, the LUCFP does not generally permit (in residential neighborhoods) more intense uses or bulk standards than are currently represented on the ground. However, as new construction replaces vacant and abandoned units, this may lead to increases in density in some areas, even though the scale of development is consistent with historical patterns.

The following zones are recommended to achieve the mix of uses, density, and community characteristics that will achieve the City's community-driven goals and objectives as articulated throughout the Master Plan.
For a complete description of all zones, please download the Land Use & Community Form Plan PDF
The below map allows you to explore the land use and community form zones proposed in the Master Plan. These recommendations will ultimately be implemented through the  Land Development Ordinance Update. 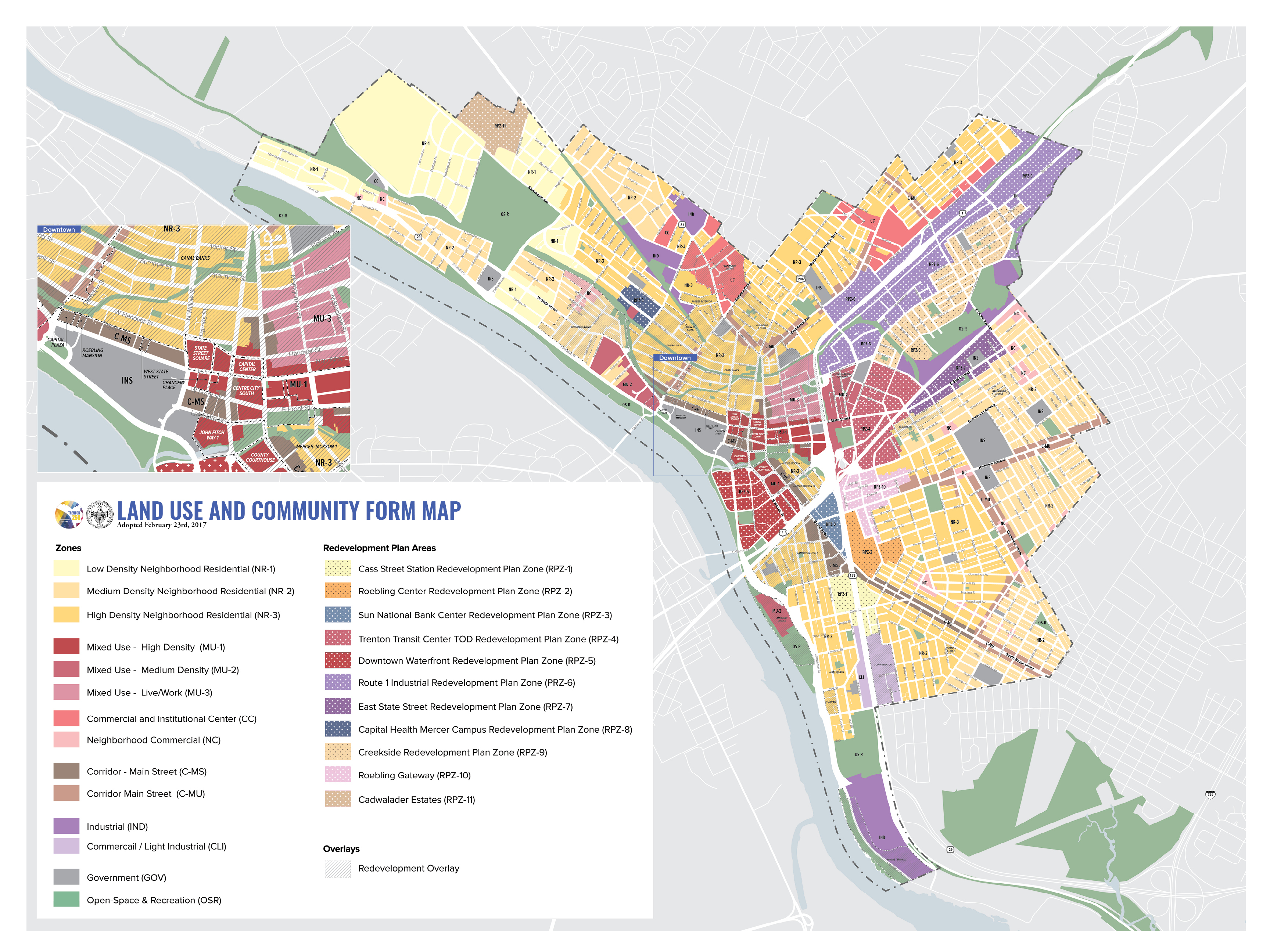