What Is A District Report?

The District Plans provide information on where some of the recommendations made in the reports should be applied in each planning district. These Plans are ideal for those who are particularly concerned about how the City will implement the Master Plan in their district or ward.

The District Plans include initiatives and actions from reports that the City has completed to date.  Therefore, there may be some issues, such as public safety, which the City has not yet addressed in sufficient detail. As funding becomes available, the City will undertake the additional reports and amend the Master Plan

Sign up for updates about this & other developments in Trenton’s Master Plan
This form needs Javascript to display, which your browser doesn't support. Sign up here instead
Maps and Additional Information

The following narrative provides detail on geographic specific initiatives and actions that must be carried out in the Downtown. A complete list of all Actions and Initiatives recommended for this District is provided at the bottom of this page. Where numbers are presented in the text - for example:  "Downtown Core (23)" - they refer to specific areas described on the Approach Map. The map below zooms in on the Approach Map and shows recommendations made for the Downtown District. 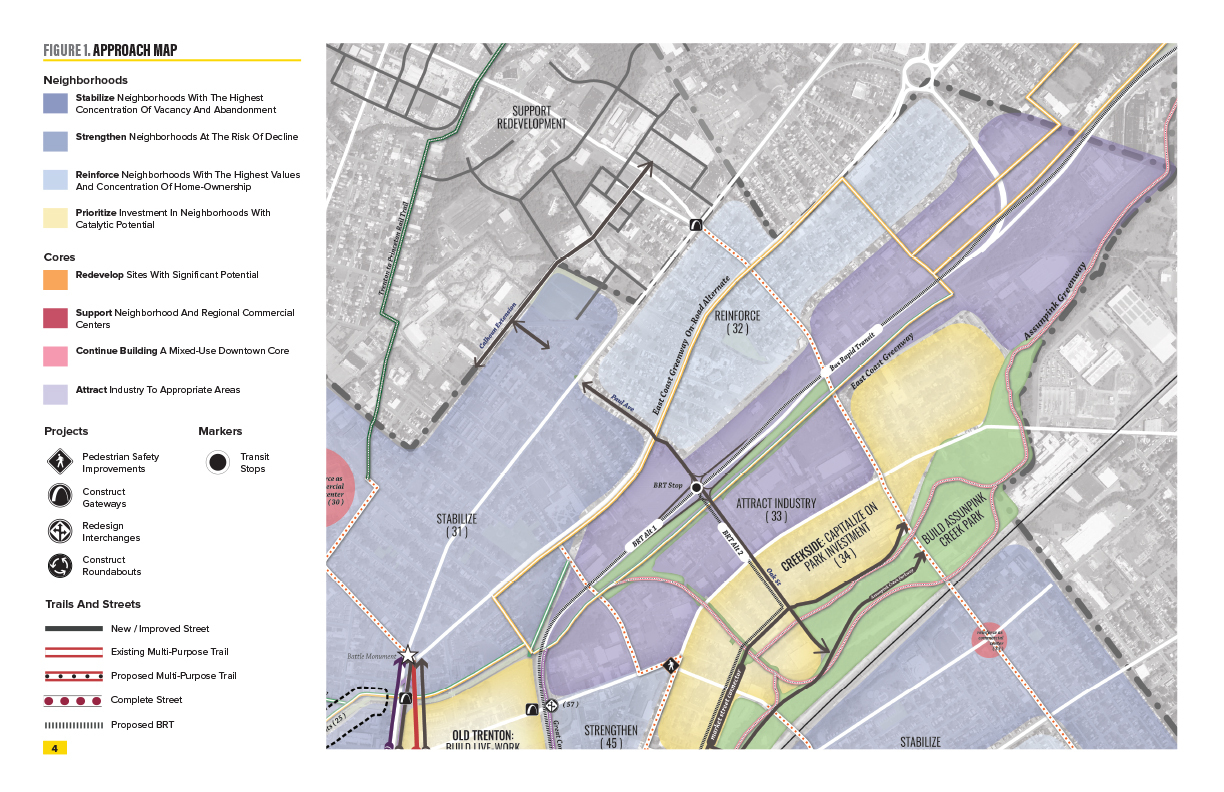 The revitalization of the Creekside Neighborhood is dependent upon the creation of the Assunpink Creek Greenway and Park Plan. The Assunpink Greenway is an expansive, 99-acre linear park project adjacent to the Assunpink Creek running through the City of Trenton. The project area includes former industrial properties held by public and private owners. Transforming this large, contaminated, flood-prone area into a greenway is a long-term and ambitious task but has the opportunity to substantially transform both the natural environment as well as the neighborhoods surrounding the park.

The creation of the Market Street Corridor will build off the success of the Assunpink Greenway Park. The project would make Market Street a central north-south travel corridor. The proposed street would travel from Olden along the proposed Assunpink Creek Park, past the Trenton Transit Center, and down to the waterfront. Such an effort would not only establish a strong local north-south connection but would serve as a complete multi-purpose street that connects major amenities throughout the City including the Assunpink Greenway Park, the proposed waterfront park (See Waterfront Reclamation and Redevelopment Project), and the East Coast Greenway.

The Oak Street Corridor Project includes creating a new interchange with Route 1 that would also include a BRT Stop (see Bus Rapid Transit (BRT) Advocacy-Partnership) will also create an opportunity to unlock the potential of the Parkside Neighborhood. These efforts would offer an east/west alternative to Olden Avenue, better link the proposed Assunpink Greenway to neighborhoods to the west of Route 1, and also assist efforts to attract industry to the area.

The above project would amount to billions of dollars of public sector investment in the area. The new amenities would make the Creekside area highly attractive to people seeking housing options with quality access to recreational activities as well as those looking to live in an urban environment but have quick access to Route 1 and the regional economic centers along it.
To capitalize on these investments, the City should follow the Prioritize Investment in Neighborhoods with Catalytic Potential: Creekside Housing. This Initiative recommends that the City should continue its efforts to land bank parcels that are likely to have a high market value after the completion of the park. The high percentage of homes with Tax liens in the area may support such effort. To ensure that such development proceeds in accordance with community developed visions, the City should work in close collaboration with residents to create a neighborhood plan for the area. This will likely result in the eventual need to update the zoning and create a redevelopment plan that will facilitate the development of this area as a strong residential neighborhood that capitalizes on access to high-quality recreational amenities.

The City must improve opportunities for and facilitates large-scale redevelopment in Trenton’s industrial areas to help create a more sustainable economy in the City with new employment opportunities. This requires undertaking four major efforts as identified in the Create Development Sites that Meet Modern Industrial Needs Initiative:
The city should also consider additional roadway network and a new interchange with Route 1 at Oak Street (see Oak Street Corridor Project). The would improve truck circulation to the industrial area and make it more attractive for new industries.
In pursuing these Redevelopment Opportunities, the City should look to Leverage the Region’s ‘Eds and Meds’ Industry to Create Spin-Off Businesses and Advance Food Production and Distribution Industries. Considering the Bucks/Mercer region’s employment concentration in the growing ‘eds and meds’ sector, Trenton is well-positioned to take advantage of this growth. A potential focus for Trenton is the med/tech industry, such as the production of medical equipment, product development, laboratory technical work, and smaller-scale distribution activity. At the same time, the City’s street network, central location, close proximity to local farms, and industrial base could make Trenton an ideal location to re-introduce a centralized food production and distribution network, creating a “Trenton food hub.”
Successful redevelopment will require that the City Nurture a City-Based Industrial Workforce to Attract Industry by partnering with the County and State to assess Trenton's workforce needs, continue to work with the Mercer County Workforce Investment Board to connect residents with skilled jobs, and support training and educational programs that match skill development with local business needs, among other efforts. These efforts will help ensure that the City, to the best of its ability, attracts redevelopment that employs residents.

The North Planning District also includes neighborhoods that are addressed within the Develop Housing Toolkit & Implement Prioritized Investment Framework Initiative. Specifically, the North Trenton 4 and 5 fall within the Reinforce Neighborhoods with the Highest Values and Concentration of Home-Ownership Initiative. The goal in these areas is to enhance and maintain the neighborhood and to promote growth in the housing market. To do so, the City must be able to respond rapidly to situations that pose a threat to neighborhood stability and work to make incremental improvements that will drive increased property values.
North Trenton 31, 32, and 33, as well as the Humboldt Sweets neighborhood, largely fall within the Stabilize Neighborhoods with the Highest Concentration of Vacancy and Abandonment Initiative. The short-term vision in these areas is to reduce the impact of the weak housing market on residents while stabilizing the housing stock so that it is ready for private sector investment when the housing market in Trenton does improve. Once the housing market does improve in these neighborhoods, they should then receive the same actions as those recommended in the Strengthen Neighborhoods at the Risk of Decline initiative.

Rezoning and Updating of Redevelopment Plans

Actions and Initiatives identified in this District