The Capital City Redevelopment Corporation (CCRC) Board has initiated the public adoption process for the draft update to its Renaissance Plan. The Renaissance Plan was first adopted in 1989 to fuel economic development within Trenton’s Capital District and to make the area a more attractive place to live, work, play, and conduct business. The update is designed to reflect changes in the social, economic, and natural environment over the last 30 years and to provide a guide for the Capital District into the future.

The Trenton Planning Board will host it's own public hearing on the Capital City Renaissance Plan on Thursday, August 26th, 2021 at 6pm. There will be an opportunity for the public to ask questions and provide feedback at the meeting. Login information for the meeting is availalbe at https://www.trentonnj.org/254/Planning-Board.

CCRC was statutorily created in 1988 to assist with the planning, coordination, and promotion of development within the Capital District, which consists of those portions of the City of Trenton that serve as its commercial center, and in which public buildings and historic sites are located.

CCRC’s Renaissance Plan guides public and private investment decisions within the district through goals, policies, and specific recommendations. In 2019, the CCRC Board began work to update the Renaissance Plan in coordination with the City of Trenton’s recent update to its Master Plan,  Trenton 250, as well as other relevant plans for areas within the CCRC Boundary.

The draft update to the Renaissance Plan identifies seven key objectives: making downtown Trenton more attractive, inviting, and safe; improving access in and around downtown; restoring traditional linkages to waterways; promoting a diversity of uses; improving the circulation and parking network downtown; expanding and enhancing the historical value of Trenton; and enhancing the social environment. It also includes individual recommendations and priority actions to achieve these goals within each of the six planning areas within Trenton: The Canal, the State Capital, the Central Business District, Mill Hill, the Riverfront, and the Transit Center. Additionally, the Renaissance Plan provides clear and predictable guidance for land use and development that considers, and is aligned with, both the long-term and aspirational goals of both the State as well as the City of Trenton, and addresses existing transportation systems and ways to manage and meet transportation demands.

The Renaissance Plan also supports efforts and seeks opportunities to create a long-term capital plan for state-owned properties that forecasts demand for physical space and consolidates and properly manages parking. It also encourages integration of state resources with the existing downtown community and focuses on redevelopment opportunities. 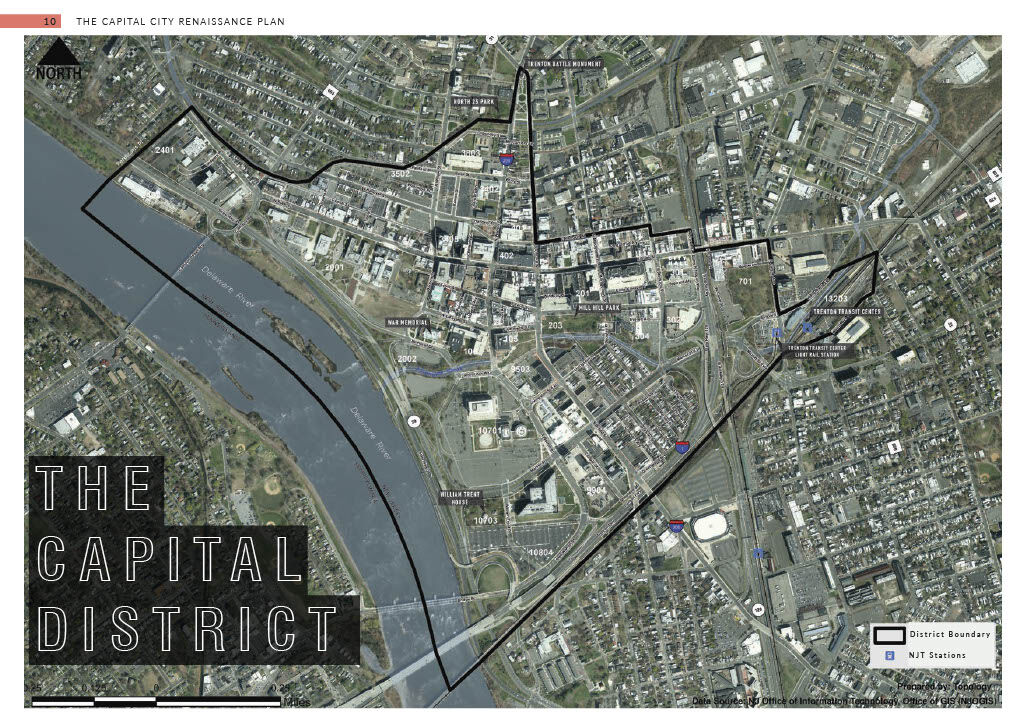