3
What is an Action?

An Action is the smallest, most concrete recommendation made in the Master Plan. An Action can be a policy, project, program, partnership, plan, study, or advocacy position. They can be City lead or sponsored by outside organizations. Actions are combined in Initiatives to achieve Goals.

Initiatives related to this Action

Route 29 is a limited access highway, which acts as a barrier between the downtown and the Delaware River. NJDOT has undertaken a feasibility analysis to convert Route 29 to an Urban Boulevard, with a network of streets supporting a redeveloped center, and access to a park and trail system along the waterfront. The current Route 29 will be re-designed as an urban boulevard that will move traffic efficiently, but at lower, safer speeds. It will provide physical and visual connections to the river. It will form the spine of a waterfront redevelopment area in the downtown, which in turn will encourage the development of a vibrant, mixed-use community adjacent to the waterfront and serve as a magnet for private investment in the capital city. This plan is strongly supported by the City of Trenton.
The City of Trenton should work with NJDOT, Mercer County and DVRPC to implement the Route 29 Boulevard Project, including the comprehensive redevelopment of Trenton’s waterfront. The proposed network in the Route 29 Boulevard Feasibility Assessment (2009) would extend Trenton’s urban fabric down to the waterfront. The City should develop a strategic plan for the redevelopment of the Route 29 area. As part of this, the City will need to identify master developers to redevelop the realigned Route 29 to open up development opportunities and increase access to the waterfront. 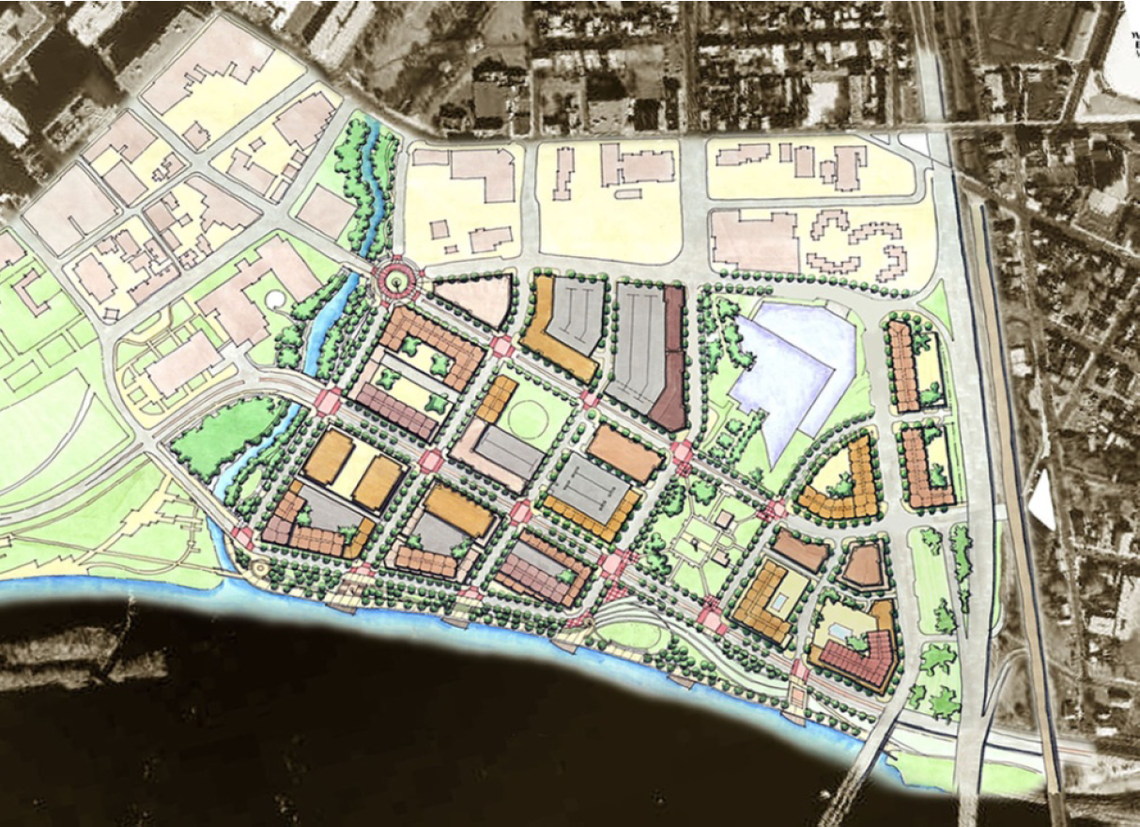 Heading south, the proposed conversion to a Boulevard transitions back to the existing roadway prior to Route 1. Traffic calming of Route 29 should start further south. Heading north, as soon as Route 29 leaves the tunnel, the character of the roadway should transition from a freeway to a more urban street. The pedestrian environment at Cass Street, and Riverview Plaza, should be improved to better accommodate bicycle and pedestrian crossings to the waterfront. The City of Trenton should study this section of Route 29 with NJDOT to determine how changes to the roadway would affect traffic, and help the City reach its goals for a redeveloped waterfront.
The Riverview Plaza intersection with Route 29 could be considered a gateway to the redeveloped waterfront, and should receive enhanced treatments, especially for bicycles and pedestrians connecting to a new Delaware River Heritage Trail. There are high traffic volumes approaching the signal from the Northbound Route 1 off-ramp. An additional slip ramp onto Route 29 northbound from Ferry Street could remove some traffic from the Route 29 intersection. Vehicles turning both left and right onto Route 29 lead to congestion on South Warren Street during peak travel times. This intersection should be studied to determine the best way to accommodate heavy volumes of vehicular traffic, while welcoming pedestrians and cyclists to the waterfront. It may be possible to match the roadway section proposed for the waterfront redevelopment, with two through lanes and a dedicated left-turn lane. Crossing distances could be further reduced with bump-outs, larger islands, and medians, to better connect the City to its waterfront. 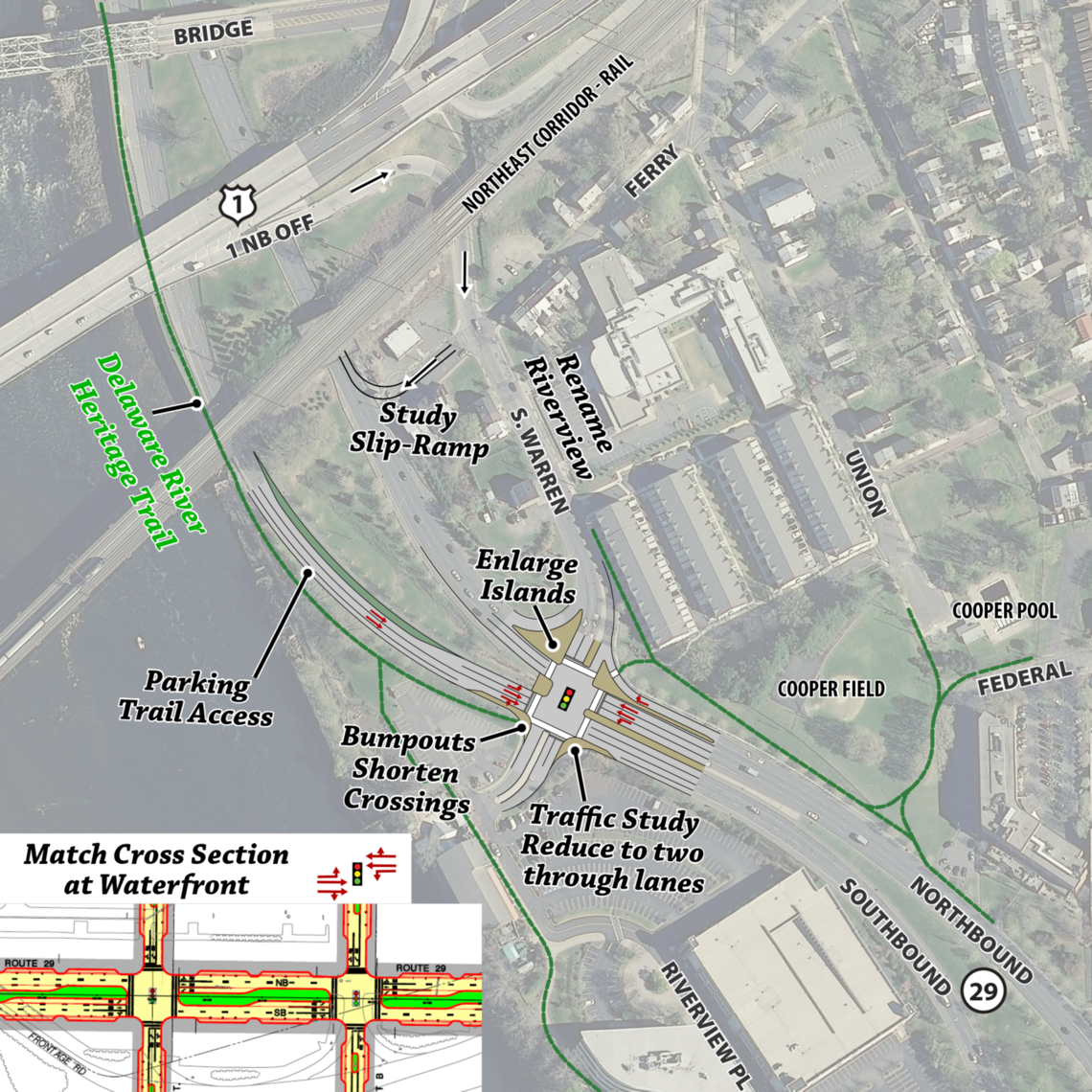 Potential funding sources include unused Federal earmarks. The Route 29 Boulevard, from Cass Street to North of Calhoun Street (southern section) has an Earmark of $2,771,000 for the feasibility of changing the road from a freeway to an urban boulevard. The northern section of Route 29, from north of Calhoun Street to Sullivan Way, has an additional earmark of $735,000. Neither of these projects are currently listed on the region’s Transportation Improvement Program (TIP). An additional earmark of $944,000 is available for trail construction along the Delaware River (See Delaware River Heritage Trail Project). The City of Trenton should work with DVRPC to add these projects to the region’s Transportation Improvement Program (TIP).
The City is developing a Waterfront Reclamation and Revitalization Strategic Plan to guide development of this long-term project. As part of that effort, the project was a recipient of a 2017 Grant through the Transportation and Community Development Initiative (TCDI), administered by DVRPC. More information on this Strategic Plan is available on the corresponding action.

Harbor Drive is a short roadway in Portland, Oregon, functioning mainly as a ramp to/from Interstate 5. It was once much longer, running along the western edge of the Willamette River in the downtown area. Most of the road was replaced with Tom McCall Waterfront Park in the 1970s. Signed as U.S. Route 99W, it had been the major route through the city and its removal is often cited as the first instance of freeway removal in the USA and as a milestone in urban planning.
Source: https://en.wikipedia.org/wiki/Harbor_Drive 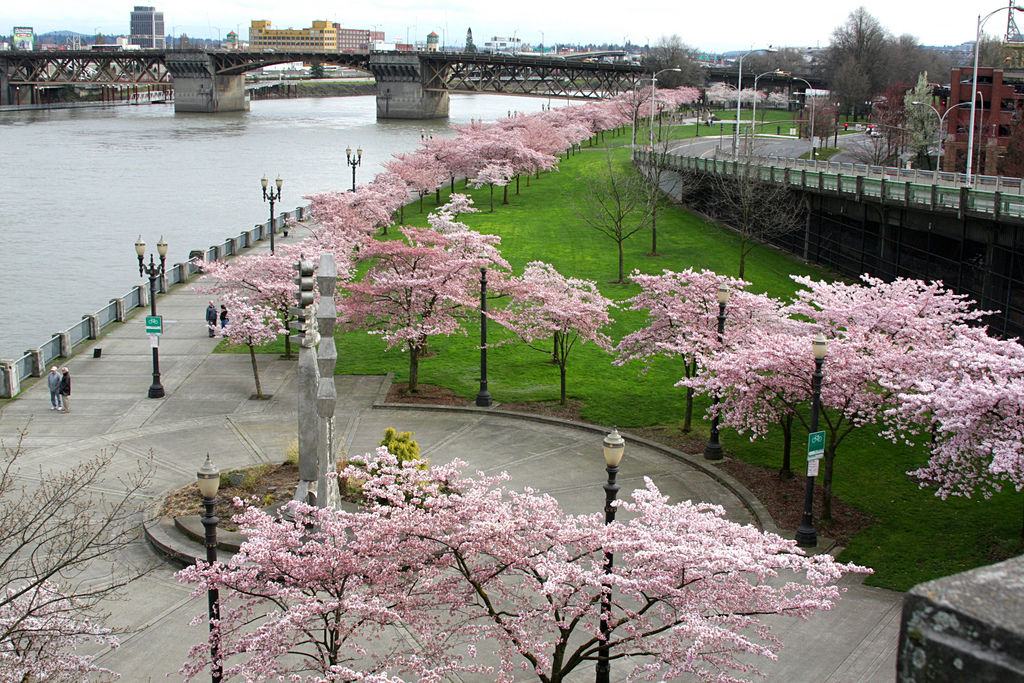 Department Of Housing And Economic Development